ONE OF MY FAVORITE SUBJECTS: GREENLANDIC MYTHOLOGY AND DISCOVERING THE OLD WORLD BELIEFS .

PLEASE NOTE THAT THE INUIT PEOPLE HAD NO FIXED BELIEFS, SO THESE ARE MY BEST  INTERPRETATIONS 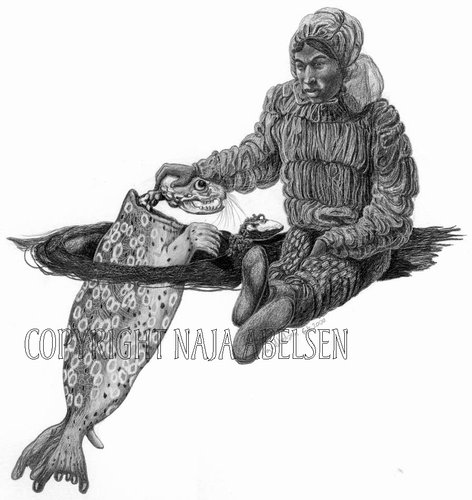 Illustration of a young person training to become a shaman. Having found a stone on the beach to rub in circles against the cliff, lonely in the mountains, for maybe 3 or 4 days. Then the trance appears, a hole in the cliff grows, and up in the hole comes this seal spirit, called Angiut, to be his first spirit helper, good to have for predicting the weather and helping cure small diseases. 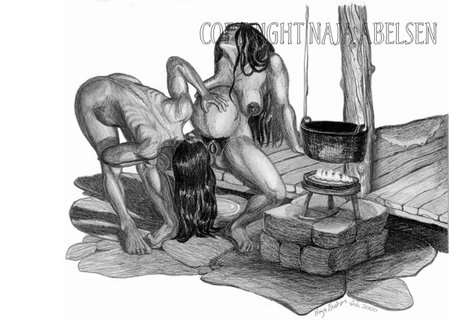 Old greenlandic way of giving birth. They thought every knot had to be untied, not to stop the birth canal, they should be naked too, as they could not wash their skin clothes. The midwife could help the child out by whistleing, to make the child curious and want to come out quicker. If that didn't help the father could run in and out of the house, to want the child to play with him, and thus have to be born...for them the child was of course a conscious being, and an old soul too, and often a former family member, reborn. 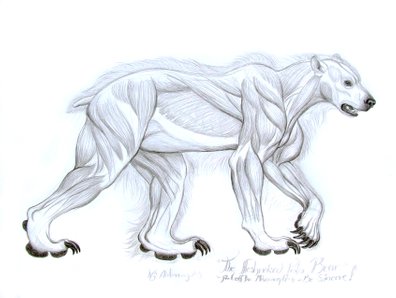 Once I read about a man, in a greenlandic text, seeing a naked bear: that meant he was soon going to die. A while after I dreamt about this halfnaked bear, got scared and woke up. Then understood the dream as to peel off some layers, becoming more honest.

Illustration of how do deal with a dead person, bury him/her, and afterwardds have to follow taboos for a whole year. The situations depicted is where the person is released from the taboos and announces this by taking an algae, followed by a undresssed old woman, and walk through the whole settlement for all to see and understand the freedom from the taboos.

The old inuit belief was that this is how the Soul lives in the body. The small souls lives in each joint. If one has a bad knee, its maybe because the soul there was lost, thrown out of the knee in an accident maybe, or fled in angst. Then the shaman had to find it in a ceremony, the souls were ligthing up in the spirit landscape. The shaman often had to persuade and sweettalk the anxious soul, before it agreed to come home to its owner. Well home the shaman blew the soul into the knee (or other joints). 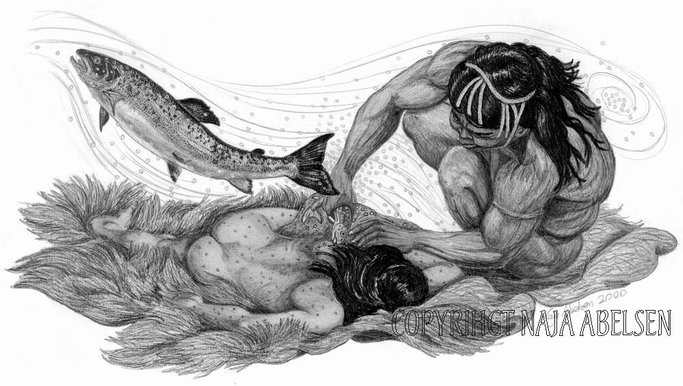 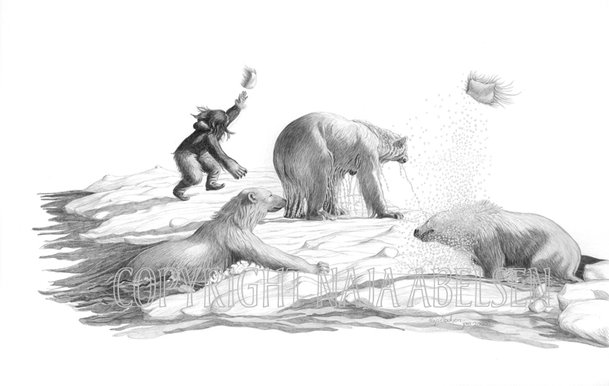 This illustration depicts the use of polar bear amulets. A father tha equipped him and his sons with the powerful polar bear skin stumps. One day they find themselves on the wrong side of the broken seaice, drifting away. They then activate the amulets, transforming into polar bears, being able to swim back to safety on the landfast ice. Here is the illustration: well arrived, changing back to humans again by shaking off the water, thus releasing the skin stump.

Illustration of the old inuit animistic beliefs: similar appearance could maybe help, as the red dots on the son reminds of the trouts red dots, and the fish is strong and healthy having these, so the worried father takes a young trout, pulls out the tongue and pricks every single red dot on the boy. Transferring the power of the trout into the son.  Somehow the boy is cured, and since this event his spirit animal is the trout or salmon.

Original not for sale.

Illustration of the old inuit shamanistic beliefs: One of the most important works I have so far done, since no one else have tried to illustrate the inuit  world view as a whole. The shamanic world is 3-layered, the upper world, the sky, the middle world, same place as the ordinary world human beings live in, and the underworld, where the original realm of death is, and where the mother of the Sea lives.

In the sky lives the Sun and the Moon, and some other spirits - spirits live everywhere - in dirrenet verisons of hte myths one can find up to 5 heavens, drawn here. The rainbow is one of the Heavens. The sky is held up by 4 old posters, and the shamans had to repair them often on the way to the skies/the Moon Man

The shamans/angakoq's travelled between the worlds to solve problems of sickness, hunger, finding lost souls and so on.

The daily world is an Island floating on the sea .

The Sky is filled with inuit star pictures, as well as other spirits living up there, and the human shaped Sun and Moon. The stars was believd to be holes in the sky, so light could shine through, another  origin of the stars  is the common belief of  being dead relatives/humans.

The picture was made for my Exhibition held at Knud Rasmussens House/museum in 2011, 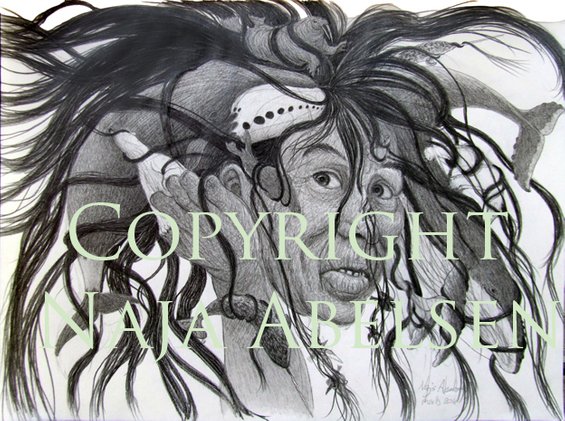 Illustration of the old inuit animistic beliefs: One of the most important deities/spirits. The mother of the Sea, ruling over the sea animals, on which the people preyed. The sea animals were created by her chopped of fingerjoints, thus being part of herself, they were easily controlled. The mother of the Sea suffered from all the bad doings of humans: each time a misded was committed, dirt clung to her hair, entangling the sea animals to it. Hunger followed at the settlement. The shaman then struggled his way to the bottom of the sea to her house. He had to struggle with her too, as she was furious, irritated by the messy hair: in her fingerlessness she couldn't comb it. He managed to cob it while fighting with her, and at last, with 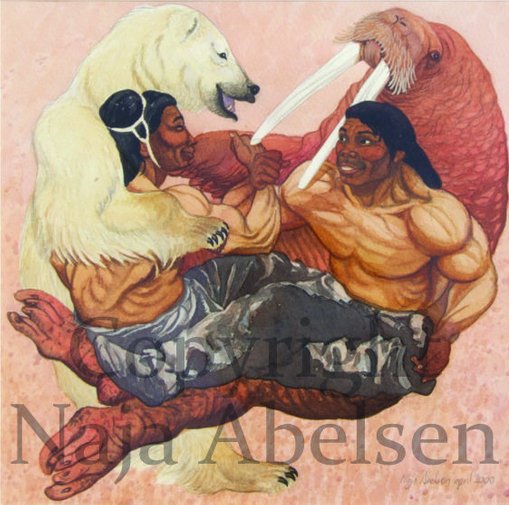 Illustration wit motive from the greenlandic mythology: humans and animals could change shape, and understand each others language, so here are to bear-walrus-men in a friendly, competitive play for strenght. The arctic version of Work-out!

Have just learned from prof. Emeritus Birgitte Sonnes text, that those two animals could also be the shaman apprentice's initiation animals, they then came flying in fireballs over the sea, and swalloved him/her and when he/she came out again, (by cutting his way out through the ribs, being spit out etc )new  light and power grew in the apprentice